In this article, I’ll review both platforms and reveal some surprising information you may not have expected.

Which Has More Customers: eBay or Amazon?

The size of eBay’s marketplaces is a small fraction of what Amazon’s is.

Amazon’s revenue was $282 billion in 2018 compared to eBay’s meager $10.75 billion. eBay’s North America revenues are even smaller relative to Amazon’s.

eBay’s total revenue per year has been essentially flat for nearly five years while Amazon’s has nearly tripled in this time.

Overall though, all things equal, you should expect Amazon to bring in 10x more sales than eBay.

Which Has Less Seller Competition: eBay or Amazon? 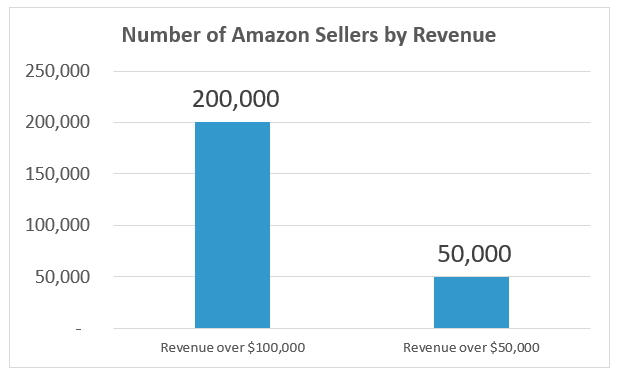 Both eBay and Amazon are selective with what data they reveal about their sellers.

eBay says there were 6.7 million sellers in 2017 but the VAST majority of these are very low-volume sellers.

eBay almost certainly has far fewer sellers than Amazon. More importantly, as we’ll get to shortly, competition for advertising is also significantly less on eBay so it’s cheaper.

Which Is Easier to Ship Items with eBay or Amazon?

Perhaps the biggest difference between eBay and Amazon is the fact that Amazon has its Fulfilled by Amazon program, more commonly known as FBA.

With Amazon FBA, sellers ship their items into Amazon and Amazon handles all fulfillment and shipping. This saves a lot of work.

With Amazon FBA, you will also be responsible for storage fees which are also expensive (up to $200 per month to store a pallet from October to December)

One major downside to Amazon FBA is that it potentially creates sales tax nexus for sellers in dozens of states meaning they have to collect and remit sales tax in those states.

Which Is Easier to Manage: eBay or Amazon?

In terms of management, eBay is a victim of its past success when it used to rule the world of used products.

eBay has a terribly confusing decentralized product management system. There can be thousands of different listings for the same exact Instapot.

eBay allows HTML/CSS in its listings which means sellers are constantly trying to edge on another in sophistication and design of their listings.

Contrary to eBay, Amazon has an extremely easy to use product management system. There is only one listing per unique UPC (the bar codes you see on products). Amazon essentially only allows photos and plain text product descriptions making listings much easier.

Which Pays You Quicker: eBay or Amazon?

Once you start selling products, you want to actually get paid for them!

In terms of payment time, this is one area where eBay is much better than Amazon. For eBay, you get paid the second a buyer purchases your item.

For Amazon, however, you do not get paid until after the buyer has purchased the item and Amazon has shipped the item to the buyer. Further, there’s a holding period of approximately two weeks on your funds.

Which Has Lower Advertising Fees: eBay or Amazon?

Both Amazon and eBay are increasingly becoming pay-to-play marketplaces. This means that often you need to pay to have your listings appear at the top of search results.

Which Is Better for Branding: eBay or Amazon?

The biggest disadvantage of Amazon though is the fact that Amazon owns the customer in every regard.

Amazon hides everything about the customer in great detail, most importantly their email address. They also severely limit how much branding of your products you can use by severely limiting HTML/CSS use.

While eBay does not want you directing customers off of eBay, you do have a lot more flexibility, including getting access to their email address and being able to somewhat brand your store and listings.

Which Is More Friendly Towards Sellers: eBay or Amazon?

Both eBay and Amazon are buyer-centric. However, Amazon tends to be more ruthless.

Amazon has a terrible reputation for suspending buyers, often with little cause or warning. In fact, an entire cottage industry of account suspension “specialists” has popped up to help sellers get unsuspended. When an Amazon account suspension occurs they immediately freeze your funds and give you little feedback.

Which Has More Good Product Categories to Sell in: eBay or Amazon?

Amazon is dominant in nearly all product categories where there is existing customer demand and the products are not found through discovery and/or purchased on impulse.

Summary: Pros and Cons of Selling on eBay and Amazon

Overall, eBay allows you the opportunity to brand your products and store more and with more forgiveness for mistakes and/or poor quality products. The cost is a significantly smaller audience and no in-house fulfillment.

The biggest advantage of Amazon is the sheer size of the marketplace. The Amazon FBA program is a close second. The cost is that Amazon is a cutthroat marketplace where you will have constant schizophrenia in fear of other sellers sabotaging you and/or Amazon suspending you.

Other Channels Outside of eBay & Amazon

Despite the fact eBay and Amazon are the juggernauts of online selling, there are other channels to sell your products on. You can see our full summary of other sales channels here. The best channels are:

Finally, Walmart for years has been trying to promote its marketplace. For better or worse, most people will get relatively few sales through Walmart at this time so it should not be a priority for you.

Conclusion- Which is Better Overall: eBay or Amazon?

Do you think Amazon is the best sales channel for sellers? Let me know your thoughts.